Give Us Time Fundraiser 2018 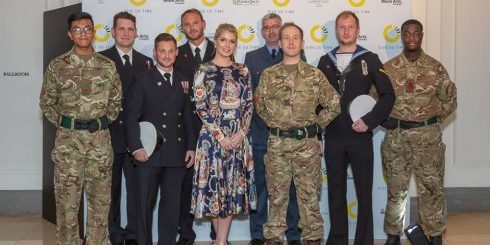 On Monday 29th October 2018, Give Us Time held its Fundraising Event at the stunning Corinthia Hotel London.

Those in attendance included Give Us Time Ambassador Ant Middleton, Viscountess Emma Weymouth and Floella Benjamin.

The charity also had the privilege of welcoming the First Sea Lord Admiral Sir Philip Jones and the Vice Chief of the Defence Staff General Sir Gordon Messenger.

The historic and illustrious surroundings of the Corinthia were fitting, having housed the administrative offices of the Ministry of Defence for 70 years.

Rt Hon Dr Liam Fox MP introduced the evening. The charity’s founder highlighted the focus of the evening – the families of military personnel. “They are the heroes behind the heroes”. He thanked them “for their sacrifice, their support and their perseverance, without which our brave armed forces personnel would not be able to do the jobs that they do”.

Lady Kitty Spencer then spoke of her privilege to be the Patron of Give Us Time. She explained the simple concept behind the charity. “If you have a hotel, a holiday home or a second home, donate any time that you’re not using and we’ll give this time to a military family”.

The experience of Senior Aircraftman Kenneth Dowling showed just how important these respite breaks can be. “What Give Us Time have done for us is they’ve given us that opportunity to bond as a family in ways that we wouldn’t have been able to do ourselves.”

After a short video further explaining the work of Give Us Time, an Auction took place, helping to raise funds for the work of the charity.

Thank you to everyone in attendance, and especially the sponsors and all those who donated prizes for the auction.