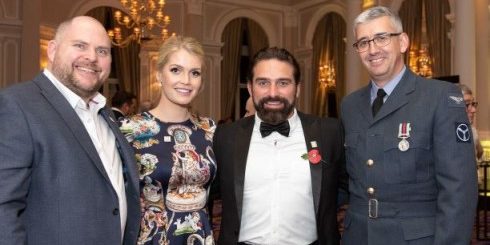 In July 2017 our daughter Sophie was diagnosed with stage D retinoblastoma (eye cancer).

As devastating as this news was, her prognosis was and still is good. Sophie underwent six months of chemotherapy along with laser therapy and cryotherapy. The Chemo ended just before Christmas 2017 and was very successful, but she still receives laser and cryotherapy every 3-4 weeks.

The welfare staff at RAF Waddington have been a tremendous help throughout and are still doing an amazing job with regards to helping me obtain RAFBF grants to help towards the expensive overnight stays at Birmingham Children’s Hospital and putting us forward for various welfare breaks.

One welfare break in particular was arranged through the charity ‘Give Us Time’. This is a relatively small charity that relies on holiday companies, holiday homes and anyone who has accommodation that can be donated for a couple of weeks per year for use by a military family that require a welfare break. Such a simple but effective concept.

My family were awarded a trip to Center Parcs, Longleat for 4 days thanks to ‘Give Us Time’ in September 2018 which really gave us a very welcome opportunity to forget all our worries of treatment and the general busy day to day life between treatment days.

On my return to work after the break, I was asked if I would appear as a guest speaker at a ‘Give Us Time’ fundraising event. This would turn out to be quite a high-profile event. The Right Honourable Dr Liam Fox opened the nights event detailing the importance and sacrifices made by the spouses and families of military personnel. Lady Kitty Spencer followed with the justification for why this charity is important and how it plays a vital role in helping military families in need. Lady Kitty Spencer then introduced me onto the stage to give a talk as a beneficiary of the charity. My talk turned somewhat emotional, but I think the message went out as to how important donating a couple of weeks per year really helps a military family.

The evening concluded with a very generous auction raising around £40,000 on the night thanks to likes of one of the charity’s ambassadors SBS veteran and TVs ‘SAS, Who dares, wins’ Ant Middleton donating a day of training in the style of his TV show which sold for £8000.

I cannot thank ‘Give us Time’ enough for what they do and what they have done for us. Also, the RAF Benevolent Fund and the welfare team at RAF Waddington who continue to support us through these sometimes difficult times. If you know anyone that can donate their holiday accommodation for just 2 weeks out of the year Speak to your unit’s welfare staff about ‘Give Us Time’ or visit www.giveustime.org.uk

Article taken from the online edition of Insight, the official magazine of RAF Waddington.