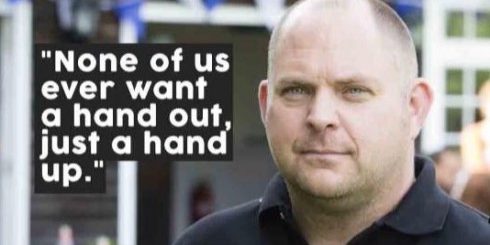 We have heard many harrowing stories of resilience through adversity, particularly from experiences within the military, but few are more compelling than Scotty’s. Scotty served for ten years as a Corporal and Training Instructor in the Army’s Royal Logistic Corps and has operational service in Northern Ireland, Bosnia and Kosovo.

Scotty had an extremely difficult period during transition and when he left the Army. Not knowing at the time that he was suffering with a mental trauma he started self-medicating with alcohol and then cocaine and heroin. It took 18 years to get a diagnosis of Major Depressive Disorder and Post-Traumatic Stress Disorder (PTSD).

Part of his recovery process was being offered a respite break, with his wife Joanne by Give Us Time, which helped him realize that his work in the military was appreciated by the public and that there was a future ahead of them: he saw it as their “Hand Up and not a Hand Out.”

He also found a role in the sporting arena and believes an active lifestyle with mental health support contributes to his recovery. He competed at the Invictus games in Orlando 2016 and said it was “humbling and rewarding.” Scotty has also been selected again this year to represent his country in Toronto at the games in September 2017: he is currently training hard!

Scotty understands the needs of our beneficiaries and as an Ambassador for Give Us Time, speaks on our behalf encouraging donors to contribute to our cause. He speaks from the heart, with brutal honesty, and can lend his experiences as a soldier, PTSD sufferer or Invictus Games competitor to any situation. But perhaps most importantly Scotty is a true gent, who wears his heart on his sleeve, who will go the extra mile for anyone who asks. His heartfelt speeches have an immense impact on all who hear them. We are delighted to have him on the team!