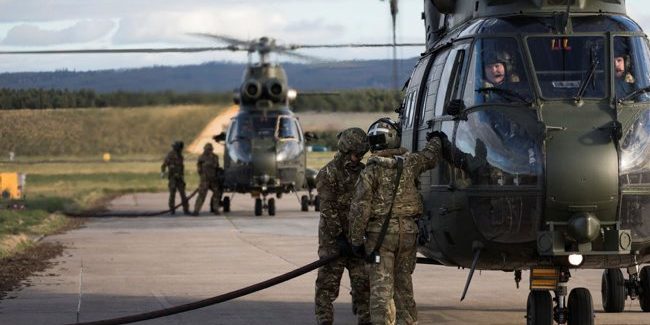 Over recent weeks the UK Armed Forces have started to play a pivotal role in combating COVID-19.

The British Army has been assisting in setting up a new temporary hospital in London, the NHS Nightingale Hospital. The Army has also been helping convert Glasgow’s SEC Centre into a temporary NHS hospital as part of the government’s response to the outbreak.

The British Army has also been delivering personal protective equipment to frontline NHS staff. Prime Minister Boris Johnson said that around 7.5 million pieces of protective equipment, including face masks, had been distributed by the Army throughout a period of 24 hours.

To add to this, 150 tri-service personnel have been training to drive oxygen tankers in support of the NHS.

The Royal Air Force helicopters are working to support the NHS, with RAF helicopters supporting the Midlands and southern England areas, working out of RAF Benson, Oxfordshire.

In Devon and Cornwall, Royal Navy helicopters based at RNAS Culdrose are to be used as air ambulances, assisting the NHS and South Western Ambulance Service during the pandemic. The aircrafts will also be used as transporters, moving both supplies and personnel.

In Gibraltar, around 175 British personnel are assisting the government, with the delivery of food and medicine to residents.

Currently, there are 20,000 military personnel on standby; the MOD is also mobilising 3,000 reservists for an initial duration of six months to support the UK’s response to coronavirus. The Ministry of Defence has also set aside specialist military planners to support public services, authorities and emergency services on a local level.

We thank all tri-services, the NHS staff and key workers for the role they are playing in battling the virus. And a special thought goes out to their families waiting for them at home.

Give Us Time Research Paper to be published by British Medical journal (BMJ)
July 15, 2021